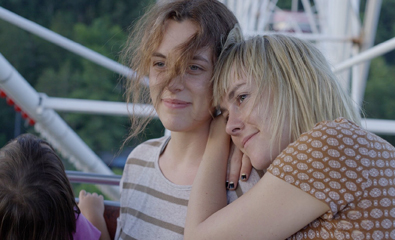 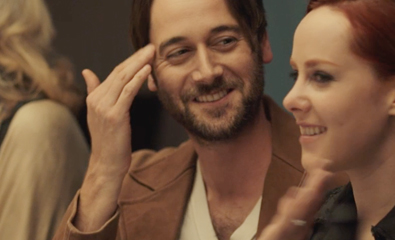 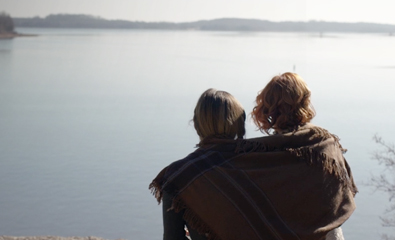 From the first minutes of Lovesong, we understand Sarah pretty well. She’s a good mom who loves her toddler, Jessie, very much. But she’s bored. She’s lonely. She might as well be a single mother, given how often her husband is away on business. Thanks to the deft direction of So Yong Kim and a nuanced performance from Riley Keough (Mad Max: Fury Road), we get Sarah right away and root for her to be happy.

Deciding she needs a change of scenery, Sarah arranges a road trip with Jessie and her longtime friend, Mindy (played with amazing dexterity by Jena Malone, The Hunger Games: Catching Fire). What follows is a slow unveiling of history between Sarah and Mindy. Much is left for us to interpret, but it’s clear that their connection is more than a friendship. The road trip is simultaneously relaxing and tumultuous until Mindy abruptly buys herself a bus ticket and heads to New York City. Alone.

When we next see Sarah and Jessie, it’s three years later and they’re once again road-tripping, this time to attend Mindy’s wedding to a nice musician named Leif (Ryan Eggold, TV’s The Blacklist). While it’s clear that Mindy and Sarah have had precious little contact in those three years, they immediately fall back into their pattern of push-pull. Sarah plays the perfect friend: running errands and picking up Mindy’s mother (a wonderfully brittle Roseanna Arquette), who can’t understand why her daughter’s getting married at all. Meanwhile Mindy does her best impression of a freaked out bride-to-be: first, she’s thrilled, then she’s having a meltdown. With the exchanging of vows imminent, years of unresolved emotions begin to bubble over.

So Yong Kim’s films are known for their subtlety, leaving a lot to the audience to deduce on its own, and Lovesong is no different. For that reason, it’s a refreshing entry in our Festival. It assumes the audience doesn’t need everything spelled out; that we can understand how people often make the biggest decisions of their lives based not on fear, but on comfort with the way things are. Sometimes the heart wants what the heart wants, even when it can’t have it.